Dilution refrigerator in the Quantum Nano 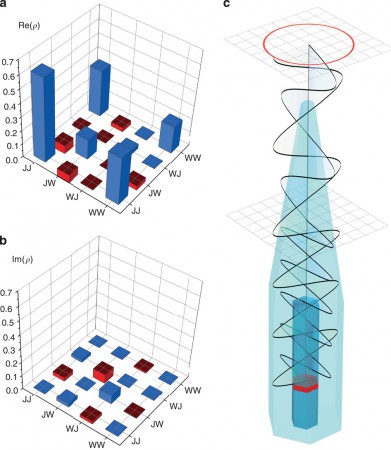 Pairs of entangled photons are created in a quantum dot inside a nanowire.

The zinc oxide crystal in which we found the preformed electron-hole Cooper pairs. 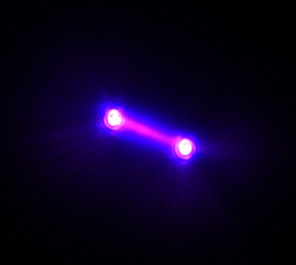 A lasing ZnO nanowire. The wire acts as a laser cavity. The laser emission emanates from the two ends. 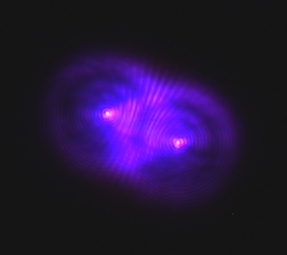 When the nanowire laser is positioned out of focus we observe interference patterns, showing that the light coming from the two ends is coherent. 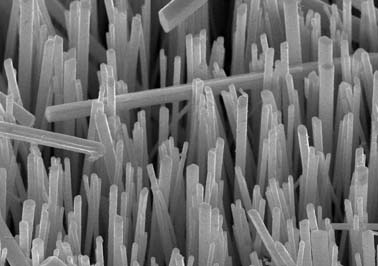 A forest of ZnO nanowire lasers can act as an ultrafast all-optical gated amplifier.


At KTH in the group Quantum Nano Photonics we studied quantum physics of excitons. Bose-Einstein condensation is an intriguing phenomenon predicted by Einstein in 1925. When the temperature of a gas of bosons (particles with integer spin) decreases below a certain critical temperature (depending on the mass and density), a large fraction of these particles collapses into a single state, showing quantum behavior on a macroscopic scale. An exciton is a bound state of an electron and a hole in a semiconductor. We optically created long-lived excitons in a Cu2O single crystal and we cooled these excitons in a dilution refrigerator with optical windows (see picture), which can reach the extremely low temperature of 10 mK (= 0.01 K).

Our papers in Communications Materials and Physical Review B describe our observations of Rydberg excitons in Cu2O microcrystals.

In the group of Anton Zeilinger we performed a loophole-free Bell test with quantum entangled photons. This experiment was performed in the Hofburg castle in Vienna. We addressed the detection loophole, the locality loophole and the freedom-of-choice loophole in one experiment. Therefore, our experiment shows that physical objects do not have measurable properties before these properties are actually measured, or that there exist physical interactions that go faster than light. For this experiment we developed a parametric downconversion source of entangled photon pairs with extremely high heralding efficiency. We measured correlations in the polarization of the photons using detectors at distant locations with fast random switching of the measurement settings. Read our paper at Physical Review Letters 115, 250401 (2015) (open access).

In the group of Val Zwiller we observed that strongly entangled photon pairs can be created by exciting a quantum dot inside a nanowire. Nanowire quantum dots are promising sources of entangled photons for quantum information processing. Unlike downconversion crystals, they produce just a single entangled pair per excitation pulse, also at high pump powers. Thanks to the nanowire waveguide, the emission is a directional gaussian beam. We discovered that linewidths as narrow as 880 MHz can be obtained by cooling down the nanowire to 300 mK and by increasing the excitation power to fill traps surrounding the quantum dot.

Helicases are proteins that unzip the double helix of DNA. This unzipping is required for replication, transcription and DNA repair. At Delft University of Technology, in the lab of Nynke Dekker, I used single-molecule techniques to clarify the mechanisms by which replicative helicases assemble on DNA and unwind the helix.

Superconductors conduct current without resistance, because many-body effects create pairs of two electrons, called “Cooper pairs.” At Utrecht University, in the group of Jaap Dijkhuis, we have observed similar pairs in a bulk semiconductor, but now of an electron and a hole. Rather than causing superconductivity, these electron-hole Cooper pairs give rise to strong light emission.

Using ultrashort laser pulses we highly excited a bulk zinc oxide crystal. Upon cooling down the crystal to 4 K, we found a strong new peak in the light emission spectrum. Both wavelength and intensity of the light excellently agree with predictions from theory. The observed light emanates from electron-hole Cooper pairs in an uncondensed state. Since there are indications that high-temperature superconductivity might also be related to uncondensed Cooper pairs, these preformed electron-hole Cooper pairs can be important in the quest to understand high-temperature superconductivity.

Zinc oxide nanowires, with diameters around 200 nm and lengths around 10 um, are among the smallest known lasers. It is often thought that the laser mechanism at room temperature involves stimulated emission from excitons. Excitons are hydrogen-atom-like bound states of an electron and a hole in a semiconductor. They only exist at electron-hole densities below the Mott density. At higher densities screening destroys the excitons. The result is an electron-hole plasma. Our many-body calculations and measurements show that the room-temperature lasing of ZnO nanowires originates from an electron-hole plasma. From our many-body theory we can explain the measured laser threshold, photon energy, and Fabry-Pérot laser modes.

Forests of nanowires are used in solar cells. Due to multiple scattering, light traversing a nanowire forest follows a long diffusive path and the absorption is enhanced. We developed a new method to measure the dwell time of light in a nanowire forest. This method is based on two-color two-photon absorption. Our measurements indicate that the light diffusion can be predicted from electron microscope images.

The strong light amplification in the ZnO nanowire lasers, in combination with the long diffusive path of light traversing the nanowire forest, makes the ZnO nanowire forest an excellent candidate for use as an ultrafast all-optical gated UV amplifier. Following excitation by a pump laser pulse, we  measured transmission increases at the drain up to a factor 34 for 385-nm light. Time-resolved amplification measurements show that the lasing is rapidly self-quenching, yielding pulse responses as short as 1.2  ps.


m.a.m.versteegh@hhs.nl
Webnode, an innovative sitebuilder
Have a captivating website for free!
Get started